Summer has officially arrived! Temperatures are rising and we’re trading in our usual steaming cuppa joe for the iced variety, and our craving for ice cream and other frozen treats is at its peak!

Despite all the ice cream brands out there, there are times when this cold, creamy delicacy can come off as unexciting and leave us wanting for more. That’s why The Maya Kitchen has come up with a simply delicious recipe that combines our favorite frozen dessert with the crowning glory of any exceptional meal: cake!

Given the choice between ice cream and cake, why not have both? Allow us to introduce one of our favorites: the Baked Alaska. This super cool treat promises the best of both worlds. 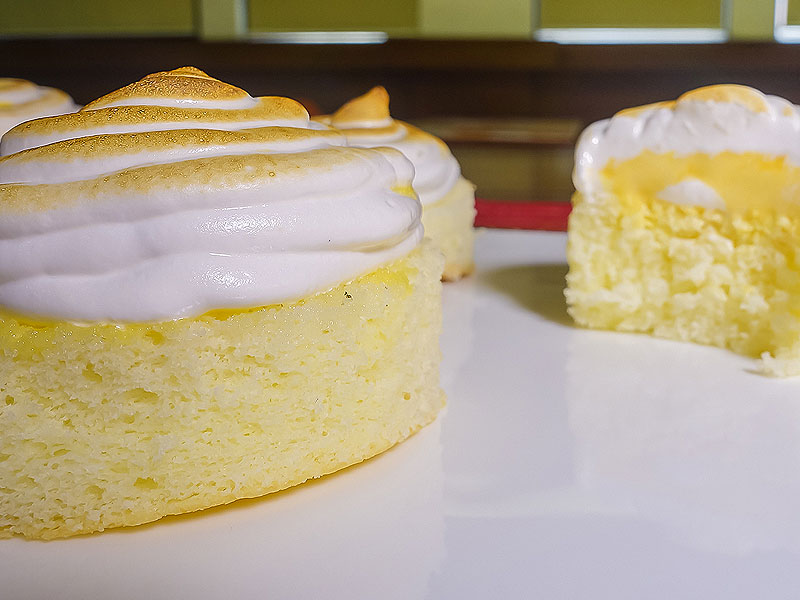 The Baked Alaska is a traditional American dessert that originated in New York City, first served at the world famous Delmonico’s. Chef Charles Ranhofer created this dish in honor of Alaska becoming part of the U.S.A. in 1867. Chef Ranhofer originally called it the Alaska, Florida; a play on the hot and cold elements of the dish. It is also known as the Norwegian Omelette.

What’s interesting about the Baked Alaska is that it needs to be baked and frozen at the same time. Sounds contradictory, we know, but the results are amazing!

So let’s discuss the hot and cold elements of the Baked Alaska. The hot element consists of baking a chiffon cake, which is very light and spongy in texture. Unlike other cakes, chiffon is made with vegetable oil instead of butter. It’s also very moist and ideal for frozen fillings.

The cold element is, of course, the ice cream. Choose any flavor you want or go for those tubs that feature three different flavors if you’re feeling adventurous. Once the layers are done, add the ice cream to serve as your filling, then ice the entire cake with meringue. Pop the cake in the freezer for a bit if the ice cream starts to melt.

Then, place your cake—icing and all—back in the oven to bake again. “But won’t the ice cream melt?” Nope. The meringue serves as insulation, because science! The key is not to keep the cake in the oven too long. Once its done, serve it immediately. This can be a complicated process, especially since we live in a tropical country where everything frozen melts in no time.

To make things easier, but not any less yummy, we at The Maya Kitchen have come up with a simple Mini Baked Alaska recipe, which doesn’t require you to bake the ice cream, ensuring its solidity and coolness. Enjoy!

Is the dish you’re cooking a bit saltier than usual? Don’t panic. Here are three tips to save your dish. Visit TheMayaKitchen.com for more cooking hacks. #TheMayaKitchen

Create yummy baked goodies that perfectly pair with your cup of coffee! In our next Zoom workshop, learn to make Sticky Cinnamon Rolls and Pesto Chicken Stuffed Bread with the expert guidance of our guest instructor Chef Heart. Fee for this virtual baking class is P2000 per device and payment options include bank transfer, GCash, and PayPal. Message us for more details or go to TheMayaKitchen.com to sign up. #TheMayaKitchen

Here are Chef Dan and Chef Elvie virtually coaching our baking students on how to properly knead dough—that you can also apply in your next baking session! Our online workshops are always interactive, giving you access to #TheMayaKitchen experts from the safety of your own home. They’re designed for you to bake or cook along with our chefs who will provide real-time coaching every step of the way. Check out TheMayaKitchen.com for the full schedule of online classes this month.

Missing those fudgy, decadent café and resto sweets? Give in to your cravings and make a cake that’s as amazing as those served in your favorite dining spots!⠀ ⠀ Indulge in a chocolate cake kissed with tasty caramel by trying out our Salted Caramel Chocolate Cake made with our MAYA Decadence Devil's Food Cake Mix. #caramelfudge #saltedcaramelfudge #bakeeasy #bakehappy #bakedecadent #newgenbaker⠀ ⠀ https://buff.ly/3mA44sS

Tomorrow is #NationalDogDay. Did you get your paw friends some treats? If you did, might as well treat yourself with some doggie-themed snacks too! Serve with marinara sauce. Yum! https://buff.ly/3z2AuQ6⠀ .⠀ .⠀ .⠀ #dogs #dogsofinstagram #dogloversclub #dogfamily #dogsarelife #dogsmakelifebetter

It's a waffle day! Learn the secrets of making this delightfully homemade waffle burger with juicy patties. Easy does it with the ever-ready Original Hotcake Mix. #nationalwaffleday #newgenbaker #bakeeasy #bakehappy 👉https://bit.ly/mayawaffleburger

Here’s a yummy way to eat your veggies! Make these tasty and healthy samosas filled with squash and beans. this recipe uses ready-made lumpia wrappers, but you can also always use Maya All-Purpose Flour to make your own! Check out our FB page for the full recipe. #GoodEatsByMaya

Our new Maya ThinkHeart Oatmeal Pancake Mix lets you enjoy the goodness of our beloved Maya Hotcake Mixes—with some added benefits from oats! Oats are among the healthiest grains on earth. They’re rich in antioxidants and fiber that can help manage weight and blood sugar too! For an even healthier breakfast, #MayaHomeCook @jenmaslang paired her oatmeal pancakes with equally healthy sides. #GoodEatsByMaya

Wondering what the hype about lechon baka is all about? Feed your curiosity (and the entire family!) by trying out this celebration-worthy dish at home this weekend! Visit our Facebook page for the recipe. #GoodEatsbyMaya